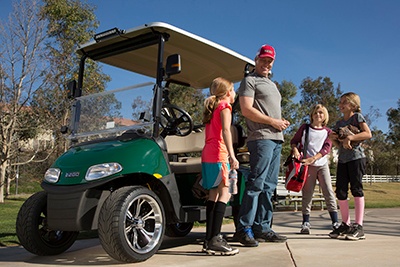 Golf carts are some of the safest vehicles you'll ever operate, but that doesn't make them immune to safety concerns. At one point during 2015, Palmetto Health Children's Hospital saw four separate cases of children who were injured in golf cart accidents. If your family relies on a golf cart or ATV for heading out to play a few rounds, traveling around the neighborhood, or even heading out in the woods to hunt or fish, it's important to know these three essential rules for staying safe on your specialty vehicle:

1. Don't Jump Into (Or Out Of) a Moving Vehicle

This is as true of golf carts as it is of a Honda. Even though golf carts and ATVs can't travel as far as your average car, they can still get up to speeds that make attempting to climb in while they're moving a dangerous prospect. Attempting to either hop on or climb into a specialty vehicle while it's in motion may cause it to tip over, causing bruising, scrapes, or even more serious injuries like broken limbs. Always ensure your specialty vehicle has come to a complete stop before you climb out, and never get into a cart that is already moving.

In the case of Palmetto Health, one of the worst injuries they reported involving golf carts was due to a child attempting to jump into one as it was in motion. The golf cart tipped over, injuring several children in the process. This is why it's so important to ensure the golf cart is always at a complete stop before anyone gets on.

2. Slow Down Before Making a Turn

Part of the fun of an ATV is in taking curves, right? Well, unless you're slowing to a safe speed first, you are still putting yourself or anyone else on the ATV at risk. In both golf carts and ATVs, it's important to brake before going into a turn in order to ensure that your specialty vehicle doesn't tip over. Children, being generally shorter and lighter than most adults, are more likely to be involved in tip-over accidents.

Since some of the most common golf cart injuries are those sustained after the cart tips over going into a turn, this tip alone can help keep your family members safe.

Since golf carts and ATVs are generally slow-moving, we find many people think it's safe to toss the keys to the kids for use without parental supervision. However, South Carolina law stipulates that anyone driving a specialty vehicle should be 16 or over and have a valid Driver's License. Make sure you stick to this rule both to stay within the law and also to lessen the chances of your children becoming injured while behind the wheel.

We also suggest making sure very young children or toddlers are restrained when the golf cart or ATV is in operation, if they are on it. Not every golf cart will automatically come with seat belts (though they are available as a customization option), but they're worth the investment if you have small children at home.

With faith and integrity as our foundation, we strive to provide the best possible products and services, fostering a "win/win" environment where customers are a priority, suppliers prefer us as clients, employees take pride in the company, and our communities are made stronger because of our contributions.